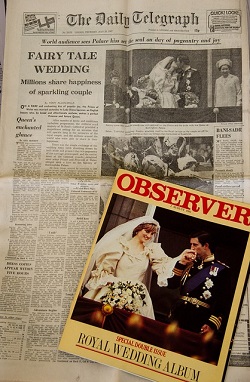 Image by sandid from Pixabay

How large was that audience? Well, estimates vary–all the way from 750 million to one billion. And I was one of them, folks.

Oh how well do I remember the early morning of July 29, 1981, when my mother came into the bedroom at 3:30 AM to get me up so that we could watch the wedding of Prince Charles and Diana Spencer live on my parents’ color TV. (The festivities began at around 10:30 AM British Summer Time, which is 7 hours ahead of Mountain Daylight Time, thus the unearthly rising time.) All I had at my apartment was a little black-and-white set, so we’d decided that I’d come over and spend the night and then get up with her. (I think my dad was working his night shift at the Post Office so he was out of the picture, in more ways than one—there’s no way he would have gotten up to watch it, I’m sure.) I remember groaning when she woke me up and saying, “I don’t want to do it” or something equally graceless, to which she said, “What? You don’t want to get up? You want to miss this?” So I heaved myself out of bed and we watched the whole thing. I have to say that my most vivid memory of the ceremony itself was thinking that the train looked kind of . . . strange. Like a hugely-long apron stretching down the aisle. Sorry! For some reason Diana did not consult me about the design of her gown. I also remember watching her climb out of that Cinderella coach and having to pull all those yards of silk out after her. Just as I thought, ‘Wow, that dress is really wrinkled,’ the commentator of the moment said that the dress had been made of heavyweight silk that would shed its wrinkles quickly. Well, maybe so.

I would be the first to admit that none of the above has a thing to do with the piece of music at hand, but hey! Context is always good. While I don’t really remember the Mathias piece at all from this original viewing, I do quite clearly remember the great New Zealand soprano Kiri Te Kanawa singing an aria, so I wasn’t completely clothes-obsessed. (Although—sigh—I do remember thinking that her dress was lovely. I’ll post a video below of her performance and you can judge both her voice and her fashion choices.) There was a great deal of music at the wedding, and it showcased British composers and performers.

So now we finally get to our selection, written by the Welsh composer William Mathias. What I wanted to know, because I always want to know the behind-the-scenes stuff, was why Mathias was chosen to write the piece. Unfortunately there are no tapes of the conversations that led to the commission, but here’s what I was able to find by way of an article in the 1981 New York Times:

The first music that Prince Charles and Lady Diana will hear after they are married next Wednesday in St. Paul’s Cathedral will not be a work that has long been part of the liturgy but a new anthem by William Mathias, commissioned by the Prince for the occasion. The invitation was conveyed to Mr. Mathias, a professor of music at University College of North Wales, by Sir David Willcocks, who is directing the music for the wedding.

The anthem, ”Let the People Praise Thee, O God,” is a setting of Psalm 67 for chorus and organ, and lasts about four minutes. Mr. Mathias has composed a number of other anthems – choral settings of texts used in the Anglican service – along with instrumental works. Mr. Mathias was approached as a Welshman writing for the Prince of Wales, in place of Malcolm Williamson, the Master of the Queen’s Musick, who ordinarily would have been called upon. (“Anthem Is Composed for Royal Bridal”)

So it seems to be the case that Mathias was chosen for the commission because he was Welsh. As is pointed out in the article above, he had a proven track record in the writing of church choral music. I wonder if Malcolm Williamson, “Master of the Queen’s Musick.” was perturbed that he was not called upon? We’ll hope he was a good sport about it. I would also note one other name in the above excerpt: David Willcocks, who conveyed the commission invitation to Mathias. Willcocks was a greatly influential figure in British music from the 1960’s onward, not composing his own music but collaborating with those who did, conducting, arranging, and teaching. At the time of the wedding he was the director of the Royal College of Music. I just have this feeling from the bits and pieces I’ve picked up about him that he was one of those people who have a gift for working with people and bringing them together.

The article says that Mathias’ piece will be the first music that the couple will hear “after they are married.” That does not mean “after the wedding ceremony is over and the couple leaves the church” but “after the officiator—the Archbishop of Canterbury, whose fashion choices were also quite spectacular—has pronounced them man and wife.” That point is by no means the end of the whole shebang. So what happens before the Mathias piece is that Charles and Diana have to go farther up the central aisle of St. Paul’s Cathedral, past the choristers who are going to sing, and then kneel for the blessing and stay there for the performance.

I was curious about the choice of text for the piece, thinking that perhaps it was simply part of the Anglican liturgy for wedding ceremonies, but that does not seem to be the case, although the psalm is included in the Anglican Book of Common Prayer. I don’t see any information about who made the decision; it was perhaps Mathias himself. Or maybe it was Charles’ favorite Psalm? Impossible to know at this point. (The Prince does have a Facebook page, but I can’t quite see myself messaging him to ask about the music choices for his wedding to Diana! As I write this post on April 2, 2020, Prince Charles is recovering from COVID-19, so I wish him well.) Whoever was responsible, the Psalm is a beautiful hymn of celebration, with words urging the singers and hearers to praise God for His righteousness, justice, and governance:

For thou shalt judge the folk righteously, and govern the nations upon earth.

Perhaps a reference to the idea that the Prince would be King one day? That’s a possibility, at least to my mind.

Will you permit me just one more tidbit about Diana’s dress? While the beautiful first bars were being sung by those adorable boy choristers she was trying to get herself situated on the bench where she and Charles were to sit, as she was trying not to crumple things up too much. But she managed, with even Charles getting into the act. I’ve tried to see his expression as he does so, but her head is blocking his face in thie video. I just wondered, ‘Didn’t they think about this ahead of time?’ The couple was already kneeling for the prayer of blessing, but perhaps it had been decided that the piece was too long for them to keep that pose. So poor Diana had to get up from kneeling and then sit back down again on that bench, with the green-robed officials placing the bench rather awkwardly. It’s a human little moment in all that grandeur.

After the ceremony the whole royal wedding party came out on the balcony and great delight was expressed every time Charles and Diana kissed for the crowd. No one new then how it would all end, of course, with divorce and death. The perfect fairy-tale couple stood there in the sunlight, waving and smiling. I hope that at least for those moments they were happy.

And here is Kiri Te Kanawa. Be sure to note the hat!