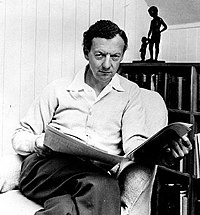 Britten in the mid-1960s, by Hans Wild, image accessed via Wikipedia

I want you to imagine yourself in this situation: You’re a very popular English composer, becoming especially known for your operas. Your country has just gone through the rigors and horrors of World War II, the current king has died, and now a new queen is to be crowned. She’s young and quite attractive, and she’s been an inspiration during the war, speaking via radio to displaced children and joining an ambulance corps over the objections of her family. You’ve been asked to write an opera to be performed as part of the coronation festivities.

So what would be a good subject for said opera?

Well, you might think, since the new queen will be Elizabeth II, why not do something about the life of Elizabeth I? Maybe you could use the name “Gloriana,” the title that Edmund Spenser had used in his poem honoring her, The Faerie Queen. And since England was also at war during the first Elizabeth’s reign, why not center the libretto on a victory for which the queen was credited? Let’s see . . . what about the defeat of the Spanish Armada, the signature event that made all of England heave a great sigh of relief and joy? The troops had cried, “Gloriana! Gloriana! Gloriana!” in honor of Elizabeth when she had delivered a speech to them as they set off to fight Spain:

I know I have the body of a weak, feeble woman; but I have the heart and stomach of a king, and of a king of England too, and think foul scorn that Parma or Spain, or any prince of Europe, should dare to invade the borders of my realm; to which rather than any dishonour shall grow by me, I myself will take up arms, I myself will be your general, judge, and rewarder of every one of your virtues in the field.

Wouldn’t an aria based on that speech (which seems to be pretty authentic) be great?

Well, maybe Benjamin Britten thought that writing an opera along such lines was too simple and obvious. I don’t know what his reasoning was. But the fact of the matter is that in honor of the 25-year-old queen, married just five years earlier to the handsome Philip of Macedonia and at the very beginning of her reign, he chose to tell the story of her namesake’s late-in-life doomed obsession with the 33-years-younger Earl of Essex, who ended up beheaded for treason against Elizabeth. The plot synopsis in the Wikipedia article on the opera has this to say about the opera’s finale: “Alone again, she reflects on her relationship with Essex and her own mortality.”

As the curtain came down, the applause was, understandably, “cool.” Or, to quote Wikipedia again, “Several in the audience of its gala opening were disappointed by the opera.” I think more than several were looking at each other and saying, “Say what?” Or even, “Say wh-a-a-a-a-a-a-t?”

A complete recording of the opera was not made for over 30 years, and it has had very few performances. (As a Coloradan, I’m proud to point out that one of those was at the famed Central City Opera House in the mountains above Denver, and indeed that 2001 performance was the work’s North American premiere.) But hey! All was not in vain. Britten included two party scenes, a masque (in which an allegory is acted out in honor of a patron or guest, sometimes by masked players—get it?) and a ball, and our selection is taken from the masque scene. Because of the song’s beautiful polyphonic lines it’s a little hard to understand the lyrics, so here they are:

From springs of bounty,
Through this county,
Streams abundant
Of thanks shall flow.
Where life was scanty,
Fruits of plenty
Swell resplendent
From earth below!
No Greek nor Roman
Queenly woman
Knew such favour
From Heav’n above
As she whose presence
Is our pleasance
Gloriana
Hath all our love!

I’m posting one of the very few YouTube recordings of this piece below. Hey, we’re going to do our small part to get this gorgeous music out to a few more listeners, if we can! (Note: This post was written in April 2020 during the COVID-19 pandemic. The Cherry Creek Chorale concert at which this music would have been performed had to be canceled, but we certainly plan to do so at a later date.)

And I’ll include as a postscript the actual account of how Elizabeth received the news of Essex’s death, as I think it’s so touching:

“It took three strokes of the axe to sever his neck and the headsman held the head aloft by its long, fair hair, saying ‘God save the Queen!’ The messenger who took the news to Elizabeth at court found her playing the virginals. At the news she stopped and there was silence. No one uttered a word. Presently she began playing again.” (from History Today, “The Execution of the Earl of Essex.”)