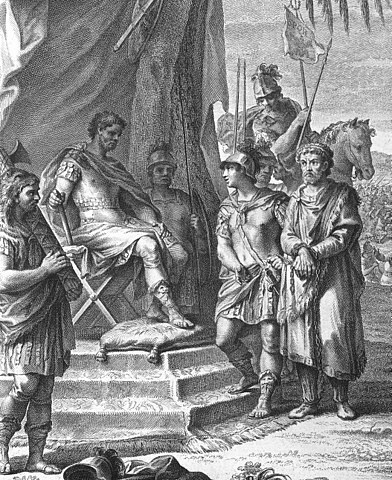 Answer: You won’t believe how much. Keep reading to find out.

First a bit of background: In October 2012 I participated in my first concert with the Cherry Creek Chorale, and a highlight was the piece “Here Is A Land” with words by the former Colorado poet laureate Thomas Hornsby Ferril and music by a young composer named Daniel Morel, the son of a couple in the Chorale. I remember being quite struck with its beautiful harmonies and the accompaniment of piano, oboe and violin.

For our sadly-cancelled-for-now-but-only-for-now May 2020 concert we were to sing another of Morel’s pieces, this one setting to music a poem by Henry Wadsworth Longfellow about an African king named Jugurtha who was captured during (what else?) the Jugurthine Wars with Rome in the first century B.C. The king was brought back to Rome to be paraded in chains as a spoil of war by the Roman general who had defeated him. He then was taken to the Tullianum, a dungeon in Rome, and left to starve to death. I have no contemporary descriptions of Jugurtha as he lived out his last miserable days, but I was reminded of a scene in a historical novel about another captured king, the Gallic leader Vercingetorix, as he sits underground awaiting his own fate:

I moved the lamp so that I could see him. He shivered and trembled. He hid his face in his hands. Insects and glistening slugs crept amid the strands of his matted, filthy hair. A rat skittered between us. (from The Triumph of Caesar by Steven Saylor, accessed via Amazon)

Roman dungeons were pretty vile places! Jugurtha knows what he is facing as he is thrown into prison. I won’t get into his long and violent career except to say that he had risen to power in the African kingdom of Numidia by fighting and murdering his rivals. Eventually Rome stepped in and removed him from power. Now, as Longfellow describes it, he is facing a shameful and protracted death. The first verse of the poem packs an enormous amount of information into just a few lines. Perhaps before I go any farther I should quote it:

I have found myself completely fascinated with all of the cultural and historical material here. Let me start by making a few observations about Longfellow and his audience. The poet himself had a lifelong love of classical Greek and Roman culture, having studied their ancient languages both in high school and in college. In his adult life he was a language teacher at Harvard and traveled to Italy a number of times. His mind would have been saturated with references to this time and place. “Jugurtha” is one of many Longfellow poems that contain ancient or classical allusions.

But what of his audience? how knowledgeable would they have been? The answer is, very knowledgeable indeed. We lose sight sometimes of how high literacy and educational standards have been in America during much of her history. A reasonably-well-educated person (usually male, but not always) would have studied Latin, with some smaller subset studying Greek. And the way you would study these languages would be to read the classical literature written in them. For Latin, one of these works would have been Plutarch’s Lives, a set of short biographies written in the second century A.D. by a Roman Greek who was interested in the moral lessons to be drawn from the lives of famous people. The Jugurthine Wars take up several long paragraphs in the life of Gaius Marius, a consul and general, and it’s  Plutarch who records the African king as saying, “O Hercules! How cold your bath is!” as he descends into the dungeon.

What on earth is that supposed to mean? Well, let me tell you what I think. Plutarch writes (yes, I looked it up) that Jugurtha’s jailers tore his clothes off before throwing him into the dungeon, with the added detail that when they pulled off his gold earrings they ripped off part of his ear. Then, “in his amazement and confusion, with a ghastly laugh, he cried out, ‘O Hercules! . . . ‘”

Longfellow knew exactly what he was doing, I believe, when he changed “Hercules” to “Apollo.” (One source I consulted postulated that he could have misquoted Plutarch, which seems unlikely at best.) He would have assumed that his audience was familiar with Plutarch and knew the original quotation. Jugurtha is referencing a folk tale about Hercules in which there is a set of hot springs created for the weary hero to refresh himself on his travels. The ruins of the baths and spa that the Romans built on the spot, including several statues of Hercules, can still be seen in the valley of Băile Herculane which is now part of Romania. (The Roman Empire covered a lot of territory.) And—I hesitate to bring this up, as I may have already exhausted your patience—there’s a reference to the Baths of Hercules in a famous Greek comedy, Aristophanes’ The Clouds, in which there’s an argument about whether or not warm baths make a person soft and weak. One character points out that the great hero Hercules used warm baths, so they can’t be all that bad. Some of Longfellow’s readers would indeed have been familiar with that play, hopelessly obscure as we would find it to be today.

Did the real Jugurtha actually say this? Who knows. Plutarch doesn’t give his sources. What did the real or the imagined Jugurtha mean? I’m guessing it’s supposed to be some ironic commentary on his great fall from a warrior/king to a disgraced prisoner. The dungeon is dark and cold, and Jugurtha has been stripped naked. Hercules was rewarded with hot springs for his refreshment and relaxation; Jugurtha has the chill of imprisonment.

Okay. Everybody still with me? As opposed to the mythic hero Hercules, the god Apollo was associated with sunlight, music, prophecy, and poetry. So the deposed king, and, in the second verse, the poet, both invoke this god. Let me quote that second (and last) verse of this very brief poem:

So . . . if I have this straight, the Poet has been lured into the darkness and mists of obscurity or death where he will end his life, just as Jugurtha was thrown into the dungeon to end his. Both men had visions of glory that failed. One source says that “in this late poem, Longfellow is implicitly expressing a sense of gloom because of his diminished poetic power.” (A Henry Wadsworth Longfellow Companion, p. 125, accessed via Google books.) Makes sense to me! Hard as it is ever to know what inspired any piece of art, I can imagine that phrase “how cold your bath is!” occurring to Longfellow just by chance and leading to the writing of the poem. Maybe he was in a particularly pessimistic mood when he thought of it and thought, “Yes, I’ve devoted my life to Apollo, and where has it gotten me?” Or maybe . . . his bathwater was cold, one particular day? I can’t ask him, so I’ll never know.

But I have been able to make some discoveries about the living composer Daniel Morel. He very kindly responded to my questions with the following:

I wrote “Longfellow’s Kings” [of which “Jugurtha” is one] because I found out about a call for new works that was put out by the Longfellow Chorus. They are a choir based out of Portland, Maine, that performs works setting his texts and works by American composers from about the same era as the poet. For several years they regularly held a competition for new works. I initially worked on this collection as something of an exercise – write the music and think no more about it. The more I was looking through Longellow’s poems, though, the more interested I got. I have since written more settings of his poems and keep going back to find interesting stuff in these older works that have somewhat been overlooked. Everyone knows “The Song of Hiawatha” but not much more.

And here’s what Morel says on his website about the music of the piece itself:

The final song sings the anguished cries of Jugurtha, whose fall is paralleled to that of the Poet, and “the vision, that lured him to follow.” The subjects’ angry cries are reflected in the severe vocal lines that quicken in a 6/8 tempo to almost frenetic heights. The song ends in a final burst, punctuating all thoughts on time, immortality, and the anquish of humanity.

And that’s where I’ll have to leave it, rather reluctantly. Below is a link to a recording of the piece: