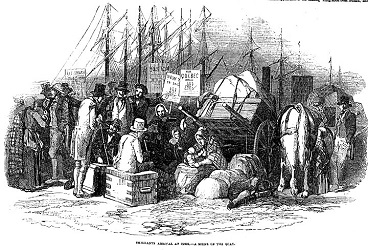 From sketches by James Mahony of the Famine in Skibbereen published in the Illustrated London News February 13, 1847

Several years ago on a family vacation I bought a book about Yugoslavian or Bosnian refugees during World War II. I don’t have the book any more, and it’s just hopeless to try googling “World War II Yugoslavian refugees” or some such, as there are dozens of entries. But it was such a moving memoir, especially about the mother. I remember sitting on the veranda of a museum somewhere in New Mexico, stealing some time to keep reading while waiting for the rest of my family to come out. When I read the words to “Skibbereen” I was irresistibly reminded of that book, as the same tragic events unfold in both. A mother, father and child or children are forced out on the road. The mother dies. The rest of the family ends up in another country, but their homesickness never goes away. (The book traced the family’s fortunes in America; we’re not told the destination of the father and son in our song.)

“Skibbereen” is set up as a dialogue between a father and son. “Why did you leave Ireland?” the son asks. “You often speak about its beauties, so why did you abandon it?” The father’s answer seems to be directly tied to the potato famine with his statement “Until a blight came on my crops.” But he also says, “the sheep and cattle died,” which didn’t necessarily happen during that specific time. The Irish humans needed the potatoes to survive, but the livestock could graze. If you read the initial historical background for Letters from Ireland as a whole, you’ll know that Ireland actually exported a great deal of food during the famine. It may be, though, that in this specific area there were animal as well as human deaths from famine and disease. The town of Skibbereen was especially hard hit by the potato blight and now has its own regional museum on the subject. If you want to read something truly hair-raising, take a look at this article from The Skibbereen Eagle which includes eyewitness accounts of the famine’s misery. (Also make sure that you read their blurb at the bottom of the page in which the publishers explain how long the paper has been in business and how they sent a message to the Czar of Russia in 1898 warning that gentleman that the Eagle had its eye on him and he should “be careful how he proceeded”!)

The father explains to his son that he couldn’t pay the rent or taxes. Here’s a verse from the full version of the song that helps explain the sequence of events a little more clearly:

You may find some aspects of this scene to be puzzling, though, as do I. Where are the landlord and sheriff going to take them? And why on earth do they set fire to the roof of a perfectly good farmhouse? Won’t the next tenants want to have the use of that building? While I can’t be totally sure about the answers to these questions, it’s probable that the family is going to be carted off to the Skibbereen workhouse, or poorhouse, where they’ll be forced to do some type of labor for enough food to live on but nothing more.

If you’re up on your Dickens you’ll know that being sent to the workhouse was considered a total disgrace and also somewhat of a death sentence even though in theory you’d get food. Supplies were very scarce even in areas that weren’t having a famine. Here’s a good explanation of how the system worked:

If you fell behind on your bills or couldn’t pay legal fines, you and your family went to flea-ridden government workhouses where you would labor to earn your keep.

Your work did not, however, pay off your debts – you could spend the rest of your life there. If you died in a debtor’s prison, your body was given to anatomists to dissect in the name of science. (from “A Christmas Carol: Sending the Poor to Prison”—The entire article is well worth a read.)

Here’s what Scrooge himself has to say about the system before his night with the spirits:

“I don’t make merry myself at Christmas and I can’t afford to make idle people merry. I help to support the establishments I have mentioned: they cost enough: and those who are badly off must go there.”

“Many can’t go there; and many would rather die.”

“If they would rather die,” said Scrooge, “they had better do it, and decrease the surplus population.”

Scrooge will have those words thrown back in his face by the Ghost of Christmas Present.

Okay, back to the song. The burning of the roof seems to stem from pure spite, or “spleen,” on the part of the officials who’ve come to carry out the eviction. The mother faints “in anguish from the desolation round” and dies, being buried in Skibbereen. The father doesn’t want to leave his son with friends even though the child is just two years old and “feeble.” The little boy seems to be the father’s only child and so bears his name. If he’s left behind that name will be lost. So the father wraps him up in a blanket, heaves a sigh, and leaves his home in “the dead of night unseen” in order to avoid being taken away to the workhouse. A more colorful term for “blanket” in some versions of the song is the Irish “cóta mór,” meaning “great coat,” a traditional piece of Irish winter clothing.

The illustration for this post shows immigrants leaving Ireland from Cork County, which is where the town of Skibbereen is located. You can see signs indicating where the various people are going. The name of the town, by the way, means “Little Boat Harbor.” The River Ilen runs through it and reaches the sea in about 7 ½ miles. I’m assuming that the father has to walk that distance carrying his son.

There’s a final verse included in some versions of the song that looks to a future when Ireland is revenged for her hardships:

Oh father dear, the day will come when in answer to the call
All Irish men of freedom stern will rally one and all
I’ll be the man to lead the band beneath the flag of green
And loud and clear we’ll raise the cheer, Revenge for Skibbereen!

Here’s a very emotional performance of the song with lovely Skibbereen scenery as accompaniment: