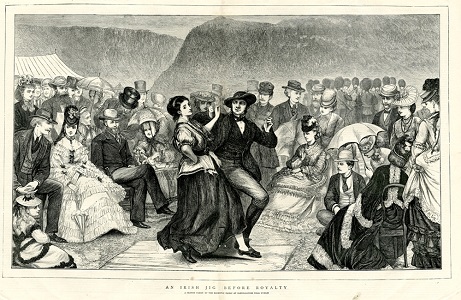 Image source: Wikimedia Commons, public domain, dated 1870. A much more decorous scene than in our selection!

Lots of rows and ructions, that’s what. In other words, it isn’t a decorous little tea party. But we’ll get to that issue in a minute. First we need to establish the occasion. It’s a dance held to celebrate the inheritance of young Jeremy Lanigan, whose father has died and left him a farm. He’s been “battering away” until he “hasn’t a shillin.’”  Suddenly his father dies and “makes him a man again,” leaving him a farm with ten acres. So Jeremy decides to throw a big party for “friends and relations,” those who haven’t forgotten him during his time of hardship but instead have “come to the wall” for him. Or at least that’s the most common interpretation I’ve come across. I have my doubts, though. Read on for some rank speculation.

The first question I have is, If Jeremy’s father was a landowner, able to leave him a farm, why has Jeremy been “battering away” (which I assume means doing hard, ill-paid manual labor) all this time? And the second is, Why doesn’t there seem to be any grief about the father’s death? Instead, the occasion is seen to be the cause of great celebration. I’m probably over-thinking this whole thing, but I have a picture in my mind of this James Dean-like young man, probably at odds with his (elderly?) father, suddenly getting the unbelievable news that he’s been left an inheritance. And what does he immediately do? Why, spend a lot of money in a big party, inviting everyone who wants to come. I’ve found one, yes, one, version that uses the terminology “Who didn’t forget him when it comes to the will,” which to me makes a lot more sense than “when come to the wall.” The people who come to the party aren’t necessarily loyal to him; they’re the “friends and relations” of the person telling the story.

Here are a couple of verses that are left out of our arrangement which make the picture a little clearer:

Lashings of punch and wine for the ladies
Potatoes and cakes, there was bacon and tea
Nolans, Dolans, O’Grady’s, MacCarthy’s
Courting the girls and dancing away

Now we get to the verse in our arrangement about the dancing, with the speaker and someone named “Julie” doing a “real Irish jig.” The speaker is decidedly not impressed with the “nonsensical polkas” that the other guests are doing, so he decides to show them what’s what. Different wordings abound, again, especially for the line “Oh how that girl, she really got mad at me.” How can Julie be all that mad at him if she’s willing to dance with him? Other versions are “she really was mad for me” or “Oh how the girls they really got mad at me” because “we danced till they thought the ceilings would fall.” Either one of those versions seems clearer than the wording we have.

In the fullest of set of verses I’ve found, the ball ends up being a great big brawl. One of the young men mistakenly puts his foot through a young lady’s hoopskirt. Another young woman passes out, perhaps because of taking “a small drop too much,” although it’s noted that her cheeks are still red, with some of the lads saying that she’s “painted,” or wearing makeup, a sure sign of a fast girl. The boyfriends and brothers of these two girls get mad and start a fight. One young man rips the leg off a table and uses it as a club. In the end, everyone ends up in a grand free-for-all:

Boys, oh boys, ’twas then there were runctions.
Myself got a lick from big Phelim McHugh.
I soon replied to his introduction
And kicked up a terrible hullabaloo.
Ould Casey, the piper, was near being strangled.
They squeezed up his pipes, bellows, chanters and all.
The girls, in their ribbons, they got all entangled
And that put an end to Lanigan’s Ball.

Can’t you just see this big heap of people, all panting on the floor, too spent to continue the dance? We’ll hope that everyone ended up laughing and going home with great memories and no lasting injuries.

And what about the chorus, in which the speaker emphasizes how much time he spent preparing for the ball by taking dancing lessons? There are, again, several versions, and our arrangement refers to both of them. The narrator of the song says both that he spent “six long months” in Dublin learning to dance for the ball and that he spent “three weeks” at “Brooks Academy” learning new steps. All I can say is, it’s obviously not supposed to make much sense! Since we were told earlier that the invitees quickly gathered for the dance, it doesn’t seem likely that our narrator really spent six months, or even three weeks, learning to dance in preparation for it. I wonder if it’s an “aw shucks” kind of thing. People tell him he’s a good dancer, and he says, “Aw, I’ve spent weeks/months learning how”?

The whole song has an air of good-humored chaos about it. As I was writing this paragraph I was reminded of the party scene at old Fezziwig’s warehouse in Charles Dickens’ A Christmas Carol, one that most decidedly does not end in a brawl but has the same atmosphere of free, unfettered gaiety:

If you haven’t read this classic for awhile, or perhaps ever, here’s a link to a digitized version of an early printing from the Gutenberg Project.

And so we take our leave of Jeremy Lanigan and his party, going out on the road again. Our company will be far rougher than that innocent young man we accompanied to Dublin earlier in this suite.