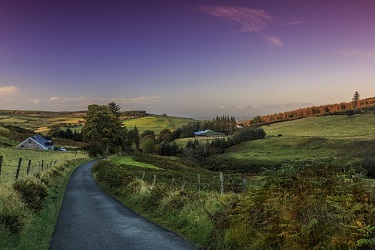 Image by Sean Griffin from Pixabay

We take off on “The Rocky Road to Dublin,” following our hero along the way as he leaves his home town and goes to the city to make his fortune. The storyline should sound familiar, as it’s used frequently in adventure tales. Are you up on your literary terms? The young man’s decision to leave home is the “generating incident”—the event that gets the story going. As he travels, the young man will undergo trials and learn lessons.

In the Letters from Ireland suite, arranger Mark Brymer has ended the song with the hero’s arrival in Dublin, although the original lyrics go on to detail his departure for Liverpool across the Irish Sea, his mistreatment by the captain of the ship, and his fighting with those who insult Ireland when he arrives on the streets of that English city. I’ll stick to the verses in our arrangement, as there’s plenty to discuss just with them.

The first verse has our hero starting out for the big city at the beginning of the summer (versions exist with either May or June, with “June” as a closer rhyme to “Tuam,” the name of his home town). The girls are “nearly broken-hearted,” or at least he thinks they are. He “salutes” his father (shakes his hand, maybe?) and kisses his mother, drinks a pint of beer, and is off, he says, to “reap the corn,” simply a way of saying that he’s hoping to make lots of money. Probably everyone reading this will know that “corn” doesn’t mean what Americans mean by that word. For British speakers “corn” can refer to any type of grain but usually wheat, oats or barley, or it can mean any type of small, hard particle. We use the word “peppercorn” here in the US, for instance, and most Americans know that “corned beef” is a traditional Irish dish. You may have thought that this type of meat comes from corn-fed cows, but that is not the case, my friends. The beef has been “corned” with grains of salt. Anyway, the young man hopes to come home with lots of wealth in his pockets.

He cuts himself a “stout blackthorn” or cudgel, or shillelagh, as he goes. According to at least one source I consulted, the roots of the blackthorn would form the knob of the stick, and if the carrier got into a fight he could flip the ends around and use the heavy roots to deliver a solid whack. Our speaker says that his purpose for cutting the stick is to “banish ghost and goblin” as he travels over the Irish bogs, or swamps, on his way. Well, maybe he’s thinking of the folk tales of malevolent Irish creatures such as banshees, but perhaps he’s more concerned with other creatures that are far too real: bandits and highwaymen. Either way, he’s ready!

By the time he gets to Mullingar (about 70 miles from Tuam) he’s pretty weary. (Note that he’s wearing a new pair of shoes, or “brogues,” which can’t have helped his feet. We’ll see the word “brogue” again in a later verse.) But after a night spent sleeping on the road he rises up, rested and ready to go. His breakfast? “A drop of the pure,” or whiskey, which is “the Paddy’s cure” whenever his heart is sinking. “Paddy” is, of course, a shortened, nickname version of “Patrick,” a usual Irish first name. Have you ever wondered what the term “whiskey” actually means? (The spelling with the “e” is Irish; for other liquors of this type, notably from Scotland, “whisky” is preferred, although both are technically correct.) Anyway, however you want to spell it, the name comes from Gaelic, written in the Irish spelling as “uisce beatha”—which means “water of life.” (My attempt to spell “uisce” phonetically is “weesh-ka.”) But we’ll get to more whiskey lore in “Whiskey in the Jar,” so let’s leave it at that for now.

Okay. Paddy (I guess we’ll call him that for convenience’ sake) continues on his way, meeting various “lassies” who laugh at his “curious style.” They obviously think he’s a country bumpkin, which he is. When they ask him if he is hired and what wages he requires, I assume they’re implying that he’s a common laborer who works by the day. Paddy gets tired of their teasing and continues on his way. When he finally gets to Dublin he fares even worse in the treatment he gets from the city folk than he did from the girls. Then he was teased; how he’s robbed. No sooner has he entered Dublin and taken a stroll to get a view of that fine city than his bundle is taken. He’s been carrying it at the end of his stick that’s balanced on his shoulder à la hobo, and suddenly looks behind to see that the bundle is gone. Someone even in that “quality” area of town has taken it, but when he tries to get help he’s told that his “Connaught brogue” isn’t much in vogue. In other words, the Dubliners are saying, “You’re just a hick from the sticks, so what did you expect? Get over it, and next time be more careful.” (Here the second use of “brogue” means “accent” or “dialect.” “Connaught” is the area of Ireland from where he’s come.) And there the story ends in this arrangement, so we’ll leave Paddy lamenting his loss.

On to the refrain. Many if not most folk songs, and indeed songs in general, have this element, also sometimes called the chorus. If you think about it, having a repeated, well-known section that comes at the end of every verse is an aid to audience participation and an invitation for improvisation. Many work songs, for example, have verses that make no sense but that were clearly made up on the spot to fit a certain rhyme scheme, with everyone joining in on the chorus. I wrote a post on my music blog some time ago about the American folk song “She’ll Be Comin’ Round the Mountain,” noting that two deathless verses are: “She’ll be wearin’ red pajamas when she comes” and “She’ll be carryin’ three white puppies when she comes.” Needless but sad to say, those two verses don’t usually make it into choral arrangements.

So the refrain for “Rocky Road,” or at least the one most used, has three elements:

Counting beats to follow a rhythmic pattern (“One, two, three, four, five). I usually refrain (sorry) from any musical analysis in my essays on texts, but I do need to point out here that “Rocky Road” is in the form of an Irish dance usually called a “slip jig.” The beat-counting section is in 9/8 time, with the beats alternating between double and single beats.

A reference to the name of an actual Irish jig, “Hunt the Hare.” I’ve included a video below of some lovely Irish dancing to our song, but keep in mind that this performance is very formalized. A real Irish jig at a party (which we’ll get to in “Lanigan’s Ball”) would be much rowdier. I’ve tried to find such a scene online but haven’t succeeded; I’m assuming that the “hunt” reference is to the head couple leading the way through the figures of the jig.

Nonsense words: “Whack folol de-da.” I’m irresistibly reminded of “With a knick-knack paddywhack” from “This Old Man.” You can probably come up with any number of other examples.

This song is considered to be very difficult and a test of a fiddler’s, dancer’s or singer’s abilities. I won’t argue with that analysis!

And here’s a great performance of the song, set among some very evocative scenery: