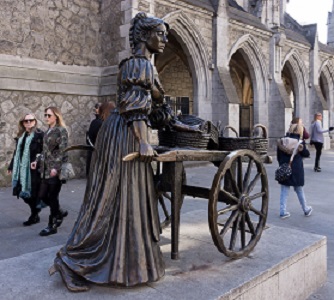 First things first: what’s a cockle? Maybe you already knew this, but it’s a type of clam, one of the smallest, with pretty striped shells similar to that of a scallop. I think everyone knows what a mussel is. Molly is going around Dublin selling fresh seafood out of a cart or wheelbarrow and advertising her wares by calling or crying out: “Cockles and mussels, alive, alive-o!” So a couple of points can be made here:

1) It was very common in the past for vendors of all sorts to call out about their wares as they traveled through the streets of a town. We think our modern busy cities are noisy places with horns honking and tires swishing, but in reality we have it pretty quiet. Molly would have been one of many salespeople trying to get people’s attention. She’d be competing with perhaps a knife grinder, a vegetable seller, and the “rag-and-bone man,” a colorful character who shows up fairly frequently in Dickens. (Today we’d call him a “junk collector.”)

Here’s a good description of how the process would have worked:

[The song] tells of a Dublin long gone, when street vendors plied their trade from a barrow having collected their produce from the early morning markets.

In Molly’s case (had she lived) she would have selected her cockles and mussels from the bounty landed at the city’s quayside each morning, placed them in baskets on her barrow, and set off on her rounds.

She would probably have followed specific routes on certain days, and her customers would have listened out for the calls that announced her arrival in their locality. (“Sweet Molly Malone”)

2) She’s emphasizing that her wares are alive because shellfish are supposed to be alive when they’re cooked. (Sounds kind of gruesome, doesn’t it?) If you’re familiar with this type of cooking (even in the form of watching videos showing how other people do it, as is the extent of my knowledge), you’ll know that the shells should be closed tightly as you dump them into the pot, and if any are open you can test them by tapping on them. Sometimes the shell will then close, thus showing life, but if the shell remains open you should discard it. Shellfish in the shell spoil very quickly once dead. Then, just to complicate matters, you’re supposed to toss out any shellfish that haven’t opened after cooking. Good grief! How many are going to be left for you to eat after all this tossing? Your other option in purchasing shellfish is of course to buy them frozen, but Molly didn’t have a freezer on her cart. So she had to guarantee freshness by advertising liveness—and then she had to be sure that was true; otherwise, she’d lose out to the competition.

3) Her job wasn’t easy and required early rising and lots of physical effort. Note in the quotation above that Molly and others like her would have gone to the “early morning markets” to get their loads. These fish markets are still around today, although no one’s buying shellfish to put in a wheelbarrow. The world’s largest fish market is in Japan, at the Toyosu Market in Tokyo, and opens at 5:00 AM. The famous “tuna auctions” are still held there. The world second-largest fish market is in Madrid, opening at around the same time each morning. (The Dublin fish market closed in 2004 after 100 years; it’s now located in a suburb.) Here’s the thing: even today, if you’re a chef or retail marketer, you have to get there right when the market opens in order to get the best, freshest selection. Get there at 7:00 AM instead of 5:00 AM and you’ll find half-empty tables and picked-over fish. You have of course brought your refrigerated truck to transport the fish; Molly had only her cart and would probably (I’m speculating wildly here) have covered her shellfish with wet seaweed to keep it cool. Modern directions for storing shellfish advise covering it with ice and keeping it at a temperature of no more than 500. I think we can safely assume that Molly didn’t have any ice! So she’d do the best she could. For some reason I haven’t been able to find out any specific details of the cooling mechanisms used in 18th- and 19th-century fishmongers’ carts. While the statue in the illustration for this post may not be completely accurate, I think we have to assume that her cart was fairly large. Otherwise she would have run out of fish quickly, thus limiting her earnings. If you’ve ever “wheeled a wheelbarrow” anywhere you know how much effort that activity entrails even with the mechanical advantage that the design gives you. And remember, Dublin’s streets would have been cobblestoned, so not easy on the feet and not smooth for the wheeling.

We’re told specifically that Molly is a “fishmonger” and that “sure ‘twas no wonder” (pretty bad rhyme, but we’ll let it pass) because her parents were also in that trade. We lose sight of how predetermined the class and job prospects of most people were until very recently. In fact, I can again reference my father, as I did in the post about Ireland’s tragic history. He grew up on a farm in southwest Minnesota and never got past the eighth grade, since he was expected to help out on the farm after that. But he hated farming and did manage to escape it, although his route off the farm involved joining the Army to fight in World War II. He never went back to farming and eventually earned his GED. Even with that level of education, though, for most of his life he was sort of a modern-day street vendor, working as a Fuller Brush man, a Jewel Tea man, and a milkman. When the retail dairies started closing down their home routes he ended up working for the US Post Office, a job that lasted him until his retirement. We were very thankful for that job! He would have loved college but never made it there. I don’t know if that possibility ever entered his mind.

Anyway, back to Molly. From the way she’s described in the actual song it doesn’t seem to me that the labels that have gotten attached to her over the years are really justified: she’s “sweet Molly Malone,” and she’s a tragic rather than a risqué one, dying of a “fever” and now haunting the streets of Dublin. (A similar series of events takes place in “My Darling Clementine,” although the beloved in that song dies by drowning.) It is fair to point out that “fishwives” have always had kind of a raucous reputation and that it was the women of that occupation who were quite active in marching through the streets of Paris in the French Revolution. But Molly is a lone, and perhaps lonely, figure. There have been attempts to attach her to a real historical person, but those efforts are pretty thin. Nevertheless, June 13 is now celebrated as “Molly Malone Day” in Dublin because of a death record dated June 13, 1699, for someone of that name. The song itself is known as Dublin’s unofficial  anthem.

For your entertainment pleasure, here are some of the (unjustified but kind of funny) nicknames that she’s been assigned:

I will say that I picked a rather discreet image of her statue on the Dublin street; her (ahem) womanly attributes are greatly on display, thus adding to her bawdy reputation. But the statue dates only from 1988, while our first known printed version of the song dates back to 1876.

Here’s a clip I found on YouTube of a 1931 re-enactment (and probably re-imagining) of some street cries. No fish, I’m sorry to say!