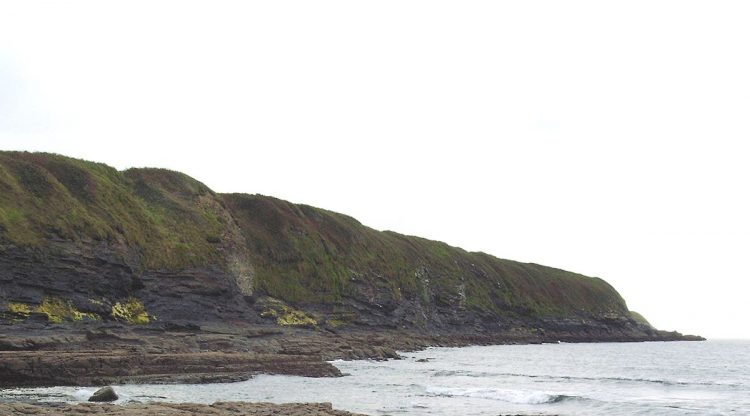 Good question! Someone thought they were so beautiful that they merited poetry. The arranger of the Letters from Ireland suite, Mark Brymer, starts out his set of pieces using a shortened form of this song that celebrates a certain place on the Irish coast. Before I get to the actual lyrics, let me address the authorship and the geography:

On authorship, the tune seems indeed to be a “traditional Irish folk song” as the sheet music indicates, at least in the sense that there’s no known author. All we know is that a “local musician” set the words to music, and there are significant variations in the melodies that are used today. But the words are another matter altogether. The lyrics say, “You may travel far, far,” and that’s how I feel after having followed any number of rabbit trails in trying to find out who wrote them and what the actual location is to which they refer. Here’s what I’ve finally come up with:

There’s a tradition that says a man named Jack McAuliffe wrote the words while he was visiting the area near the cliffs of Doneen, or Dooneen, as most versions have it. He may have been visiting his sister, or he may have been working in the area and boarding at a local cottage. I haven’t been able to find the source for this story. McAuliffe’s niece supposedly has some additional info, but, again—the trail peters out. There’s just a brief reference to her in Wikipedia with no citation given. The poem may have been written at the window of a cottage up on the cliffs, and McAuliffe seems to have enjoyed the local scenery and people, spending time up on the fields above and shores below the cliffs, with the added detail that “Local oral history speaks of them spending an evening picking periwinkles on the cliffs at fields behind the cottage.” (from a local newspaper with the great, great name “The Skibbereen Eagle.” The “periwinkles” mentioned here must be the flowers of that name and not the shellfish, since the activity takes place in the fields and not down on the shore.) Someone named Liam Buckley told the story about the writing of the poem; he wasn’t sure exactly when this happened but thought he remembered hearing it sometime in the 1930’s.

There are endless back-and-forth discussions about exactly where the cliffs are, with arguments about whether or not the towns of “Kilkee” and “Kilrush” can be seen from the same spot. So I just did a little Googlemaps experiment, and said cliffs are indeed across from those two towns. And if that weren’t good enough, there are photographs of both towns taken from the same spot on the cliffs. Why is there all this argle-bargle about the location, then? Well, empires may come and go, but Reddit threads go on forever, I guess. Mr. McAuliffe could indeed have picked other, closer towns to reference, but don’t these two alliterative names add a certain something to the lyrics? So we’ll leave it at that.

On to the actual meaning of the lyrics. It’s taken awhile, hasn’t it? And the words are so lovely! No matter who really wrote them, or which window the author looked out of, there’s no question about their evocative power. Now that I’ve found out that the probable author wasn’t native to the place (although he probably was Irish), I’m even more taken with the song. McAuliffe apparently spent just one summer, if that, on the cliffs, but he appreciated that brief time so much that he wrote this poem. In the shortened version that Brymer uses there’s a description of a “fine summer’s day” and of the wildflowers that “ne’er do decay.” I wonder if the author was thinking of his periwinkle picking as he wrote those words! Vinca, or periwinkle, is a very tough plant. There’s a feeling of sunlight and peace that radiates from the lines. Hares and pheasants are running about, raising their young. The wind is blowing, the sun is shining, and you can see for miles across the water. And then the brief segment is over. We’re on to something very different as the next musical selection goes on an adventure to the big city, taking us along on “The Rocky Road to Dublin.”

The town of Kilkee from Kerry

The two of Kilrush from Kerry