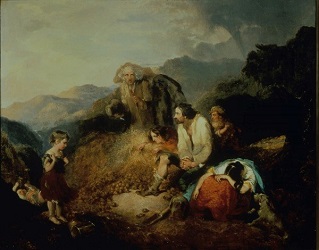 “An Irish Peasant Family Discovering the Blight of Their Store” by Daniel MacDonald, 1847, public domain.

I just sat down and went through the entire Letters from Ireland book with its arrangements of Irish folk songs interspersed with texts, mostly taken from letters written in the relevant historical period. Some are what you’d call “rollicking;” others are very somber, with perhaps “Skibbereen” being the most tragic. So what’s going on here? I’m going to give some general ideas here and then in later posts I’m going to pick out several individual folk songs to examine more closely. (You just know that “Cockles and Mussels” will be included there.)

To begin with, let me give you a couple of astoundingly obvious observations:

1) All of human life, no matter the economic and social situation, is a mixture of laughter and grief, with a fair amount of plain old
irritation and boredom thrown in for good measure.

2) You can either laugh or cry. It’s your choice, to a certain extent, although there are some events that simply can’t be laughed away. (So, a mother lying down in the road and dying, as happens in “Skibboreen,” just doesn’t have a bright side.) Our songs tend to alternate between the merry and the sad, sometimes describing truly happy events such as “Lanigan’s Ball” and sometimes just trying to keep up one’s spirits in the midst of backbreaking work, such as in “Paddy Works on the Railway.” It’s fair to say that there’s an undercurrent of sadness in almost all of the selections, stemming from the terrible
conditions in Ireland of injustice and deprivation.

What were the causes of this awfulness? Well, here are three:

For the most part, the Irish peasant farmers did not own their land. The reasons for this situation are long and complicated; suffice it to say here that one sure way to keep oppressed people oppressed is to refuse to grant them any kind of financial independence by means of property ownership. I might point out the prevalence of sharecropping in the American South after the Civil War, in which freed slaves were still in a state of bondage as they worked someone else’s land. The same pattern occurred in Ireland. Indeed, if you’re familiar with medieval history you’ll be aware of the feudal system, in which all land was owned ultimately by the king, who gave chunks to his nobles, who then farmed that land using an immensely complicated system of loyalties and obligations, with the lowly serf at the very bottom, doing the actual work out in the fields.

Even without the potato famine as described below, there was really no way for an average Irish tenant farmer to better himself. Any improvements he made on the property he worked—buildings, fences, drainage ditches, etc.—were lost to him when his lease ended, as it could at any time since he was usually what was called a “tenant at will.” In only one area of Ireland, Ulster in the north, were tenant improvements given compensation, and that area of Ireland was much better farmed and more prosperous. (Who’d have thought it? Echoes of the failures in the Soviet system ring true here, don’t they?)

While there are what can be called “true” famines, that is, famines caused perhaps by drought or other climate conditions, in which all crops fail and all livestock dies, most so-called famines are really manmade, often caused by societal forces. Nowhere is this occurrence of societal famine more obvious than in the Irish Potato Famine, or, as it was called in Ireland itself, the “Great Hunger.” The sad truth of the matter is that there was plenty of food being raised in Ireland during this time (roughly 1845-1849), but much if not most of it was exported to England as payment for taxes and rents. The Irish peasant farmers lived mainly on potatoes, which were cheap and filling. You may think, “Didn’t they suffer from malnutrition already if all they were eating was potatoes?” And the answer is, well, no. If you eat the entire potato, skin and all, you get carbs, protein, fiber, and a surprising range of vitamins and minerals. It ain’t very excitin’, but it fills the belly. One source said that an average Irish working man might eat as much as 13 pounds of potatoes a day. I read a description somewhere (who knows where) of a peasant family roasting their potatoes over the fire and then pouring the spuds onto the floor where all would scramble for a share, trying not to burn their fingers too badly in the process. When a fungal blight hit in 1845, the main source of food for the entire Irish peasant population was suddenly scarce. Estimates are that one-half of the crop was lost in 1845 and perhaps three-quarters lost in 1846.

Here’s an excellent analysis in 1860 from an Irishman active in the land-reform movement of the time:

I have called it an artificial famine: that is to say, it was a famine which desolated a rich and fertile island that produced every year abundance and superabundance to sustain all her people and many more. The English, indeed, call the famine a “dispensation of Providence”; and ascribe it entirely to the blight on potatoes. But potatoes failed in like manner all over Europe; yet there was no famine save in Ireland. The British account of the matter, then, is first, a fraud; second, a blasphemy. The Almighty, indeed, sent the potato blight, but the English created the famine. (John Mitchel, quoted in Wikipedia)

And it’s not as if the Irish farmers were very well off anyway. Here’s a pretty harrowing description from February 1845, before the blight hit:

It would be impossible adequately to describe the privations which they [the Irish labourer and his family] habitually and silently endure … in many districts their only food is the potato, their only beverage water … their cabins are seldom a protection against the weather … a bed or a blanket is a rare luxury … and nearly in all their pig and a manure heap constitute their only property. (from a report made by the Earl of Devon to the British government; source Wikipedia.)

Hard numbers are very difficult to come by, but the estimate is that by the time the first wave of blight ended in 1845 two million people had been lost to Ireland, with half from deaths caused by starvation and disease and half caused by emigration.

3) Attempts to keep the Irish from loyalty to their heritage:

Oh man, I am already over my word limit, but I beg your indulgence here because this type of mistreatment is so, so common. How to keep conquered people down? (Ireland was indeed a conquered territory, but I have no time to go into that history here.) Try to destroy their national identity. The Assyrians did it with the Israelites, deporting Jewish people and bringing in foreigners—all of this almost 2700 years ago. The mainland Chinese government today is desperately trying to destroy the Uighurs, putting them into “re-education” camps in order to root out their religious beliefs. Even in America, my father was forbidden to speak German when he started school in about 1925, not because of some high-minded attempt to get all children to learn English and integrate well into society but because of World War I. The US government was militantly anti-German, even when those Germans were native-born American citizens. (And to add insult to injury, my father wasn’t German. He was Dutch. And the language he spoke was “Low German,” not the “High German” that was actually spoken in, like, Germany. So I guess you could say it was doubly unfair, although it’s pretty hard to do mathematical calculations about ethnic and racial discrimination. It all adds up to the same result in the end. He never seemed to harbor any ill will over the whole thing, and I didn’t realize until I was an adult what was really going on with him as a little first-grader starting school in rural Minnesota. He had very fond memories of his teacher that year and he was glad he learned English, so I guess he would have fit right in with the look-on-the-bright-side sentiments in some of our Irish songs.) The final piece in Letters, “The Wearing of the Green,” is all about such attempted destruction of identity in Ireland, but I will save a more detailed analysis for a later individual post.

And with that I must close. So fascinating, and so sad! If your appetite for Irish history has been whetted even a little bit by the foregoing, I’d encourage you to read the following two articles that were forwarded to me by Rom Lester (thanks, Ron!):